VHB Completes Move to Diversified Board with Third Outside Director 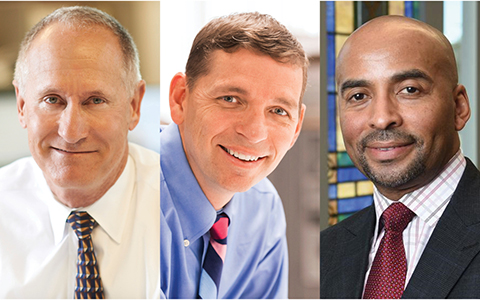 VHB recently completed its transition to a more competitive Board of Directors with the appointment of its third outside Board member, Keith Parker, President & CEO of Goodwill of North Georgia. With the addition of Keith, who joins Gerry Salontai and Carolyn Groobey, VHB’s Board of Directors is now comprised of three executive-level employees appointed by the CEO, three VHB owners recognized for their forward-thinking, innovate approach, and three outside members who bring expanded perspectives and expertise. This configuration creates a competitive edge, while maintaining a majority of stockholder employees on the Board, to ensure stewardship of VHB’s Generational Company culture and values.

“The disruptors to the AEC industry and challenges to overcome are not slowing down, and VHB’s long-term success—and that of the industry as a whole—will rely on a diversity of core competencies, perspectives, and life experiences in order to do the best level of problem-solving. Evolving the composition of our Board to include broader perspectives strategically positions the firm for future success as we prepare for the rapidly changing nature of our world and society, including technologies that are shifting the way we work,” said CEO Mike Carragher.

VHB Co-Founder and Chairman of the Board Bob Brustlin stated, “The unique mix of analytical insight, rich perspectives, distinct backgrounds, and unparalleled qualities enables VHB to continue to stretch our thinking and expand our knowledge, positioning us for more success in the future, including more complex assignments, deeper client relationships, and most importantly, greater influence on improving our communities.”

2020 VHB Board of Directors Appointments

Keith Parker – Outside Director Committee Candidate | Keith is President and Chief Executive Officer of Goodwill of North Georgia—one of the largest nonprofit organizations in the southeast. He was General Manager and CEO of MARTA (Metropolitan Atlanta Rapid Transit Authority) from 2012 to 2017. He was recognized as the Outstanding Public Transportation Manager by the American Public Transportation Association in October 2015 and one of the 20 Most Influential People of the Decade by METRO Magazine. In 2016, Parker was appointed by President Barack Obama to serve on the National Infrastructure Advisory Council. His broad range of experience on a vast array of boards of directors; experience with major metro challenges and transit systems; and demonstrated ability to think at the governance level and then translate into management guidance will be vital.

Tom Jackmin – Stockholders’ Candidate | Tom oversees growth and operations for VHB’s largest region as Regional Manager for New England. In this role, Tom is responsible for leading the region to continuous growth and success, providing integrated land development, transportation, environmental, planning and design, and applied technologies services across all of our markets. During his 20 years at VHB, he has led some of New England’s largest and most complex projects, including Route 79/Braga Bridge, East West Parkway, Hines Bridge, and Route 24 Interchange. A progressive and creative leader, Tom encourages and fosters innovation—welcoming ideas, big or small, from across his team and pushes them to keep thinking big.

Bob Brustlin – President’s Candidate (re-elect) | Bob served VHB as President and CEO for 15 years. He passed the reins to Mike Carragher in 2015, while remaining Chairman of the Board of Directors and active in companywide initiatives. Under Bob’s tenure, VHB’s focus on strengthening core services within its East Coast footprint led to dramatic growth to more than 1,100 employees across 12 states and $180M in revenues. In addition, and most important to Bob, has been fostering the firm’s Generational Company philosophy. Bob’s legacy of calm, critical insight throughout changing times for VHB and his strong understanding of the necessary partnership between governance and management is invaluable.