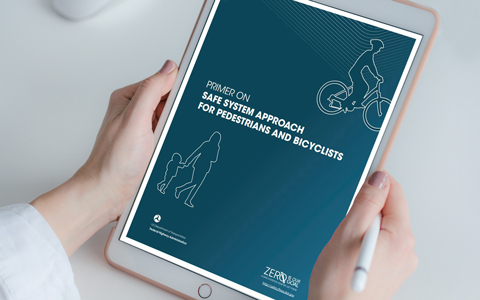 The U.S. Department of Transportation Federal Highway Administration (FHWA) partnered with VHB to produce the Primer on Safe System Approach for Pedestrians and Bicyclists, published this month. With a focus on reducing fatalities and serious injuries for pedestrians and bicyclists, the primer defines the five elements of the Safe System approach, strategies for implementation, and a Safe System Benchmarking Tool to help agencies evaluate ways to incorporate this approach into their future projects.

The Safe System approach was first introduced in Sweden in 1997 and has since been developed across the world in Europe, Australia, and New Zealand. The goal of the initiative is to reduce the number of fatalities and serious injuries of all road users by proactively putting safeguards in place. With an acceptance that crashes are inevitable and human mistakes happen, the Safe System principles focus on prioritizing the vulnerable nonmotorized road users—pedestrians and bicyclists—by creating transportation systems that proactively prepare for mistakes, ultimately saving lives.

“The Safe System approach is a newer concept for the United States and is an initiative that all of us in the transportation industry have a role in,” said Elissa Goughnour, an author of the Primer on Safe System Approach for Pedestrian and Bicyclist and Senior Transportation Project Manager at VHB. “This approach is a high priority for the FHWA, and they are leading numerous efforts for increasing awareness and providing education on how the Safe System principles can save lives across our nation. Their effort to release this document is a successful starting point for providing a foundation as many DOTs across the country begin to transform their transportation networks by putting safety for pedestrians and bicyclists at the forefront.”

VHB’s Safety Team has also been working with agencies to put the Safe System principles into practice through the development of State Strategic Highway Safety Plans. Additionally, VHB recently completed a Safe System Approach Manual for Intersections guide for the FHWA. The guide provides agencies nationwide with a reference for applying a Safe System lens to future intersection projects. VHB is already working with clients to test the approach on intersection projects, including at MassDOT, VDOT, FDOT, and GDOT.

As part of the Safe System approach primer development, VHB hosted a peer exchange in March 2021 that included Departments of Transportation from across the country, including Washington State DOT, Florida DOT, and the FHWA project team. The goal of the meeting was to discuss how to implement the Safe System approach, hear diverse perspectives from the represented agencies, discuss concerns, and share mechanisms for how the Safe System lessons learned could be useful for other agencies performing similar work.

Interested in learning more about the Primer on Safe System Approach for Pedestrians and Bicyclists, or hearing about the additional work our Safety Teams are doing across the Country? Contact Elissa Goughnour at EGoughnour@vhb.com. The Primer has also been published on FHWA’s website and can be publicly viewed here.