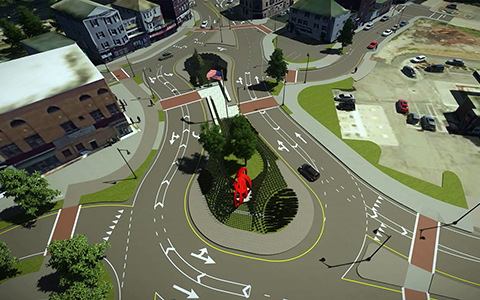 Kelley Square in Worcester, MA—long notorious for being one of the most dangerous, crash-prone intersections in the state—has been reimagined. The intersection sits amidst a lively mix of local businesses and serves as a hub that connects seven roadways, on-street parking, pedestrians, cyclists, public transit, and through traffic. VHB proudly accepted the challenge to redesign this complex intersection to increase safety and help revitalize Worcester’s downtown.

VHB worked alongside MassDOT as the lead designer to develop a solution, ultimately selecting a hybrid roundabout made up of two connecting circles instead of the traditional single circle—the first of its kind in the state. The design also features a shared-use lane around the intersection for pedestrians and cyclists, as well as separated bike lanes on certain streets.

While a project of this scale would typically take up to five years to complete, VHB worked to accommodate MassDOT’s expedited schedule, delivering concepts in three months and the final design in just seven months.

Despite initial apprehension from the community, VHB remained confident that the proposed hybrid design, dubbed a “peanut roundabout,” could undoubtedly calm traffic, enhance safety, and increase connectivity and mobility for the area’s 40,000 motorists, pedestrians, cyclists, and residents—all while maintaining the legacy and identity of Worcester.

The sophisticated, robust public engagement process was key to the project’s acceptance by residents and ultimate approval. In addition, the extensive efforts by VHB, MassDOT, and supporting teams to listen to the voice of the community led to the project winning the 2019 Jane Jacobs Award for Outstanding Public Process.