Diving into a Diverging Diamond Interchange 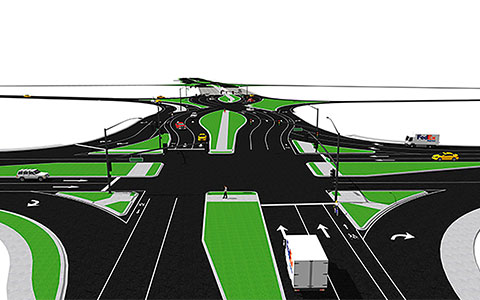 The continuous pursuit of improved traffic operations and safety has led to an evolution of thought in interchange project development and design. One of the earliest and most prevalent configurations in the U.S., the diamond interchange has been highly effective in providing grade-separated connectivity between crossing roadways. As traffic volumes have increased steadily in many regions, variations have been applied to the diamond configuration to adapt to the evolving demand. The Diverging Diamond Interchange (DDI) is one such example and has proven effective at increasing traffic capacity, decreasing delay, and reducing vehicle conflict points at many interchange locations across the country.

A study of the Springfield, MO, DDI that observed crashes in the five years prior to installation to those observed the year following installation revealed the following:

The DDI reduced the conflict points, therefore removing many of the opportunities for vehicles to collide, producing a safer, more effective traffic flow.

How the DDI Works

A key feature of the DDI is the signalized crossover intersections at the ramp terminals. The design applies unique geometry and two-phase traffic signals to shift traffic on the cross street to the left side of the roadway between the ramps; this allows all turns to and from the ramps to be made without crossing opposing traffic. The simplified signal phasing reduces traffic delay, while the unopposed turning movements promote smoother travel to and from the ramps. When applied at diamond interchanges with high turning volumes and moderate or unbalanced through volumes, the DDI has been successful in increasing capacity while requiring less infrastructure in terms of turn lane storage and wider bridge structures.

A DDI has the potential to offer several benefits compared to its conventional diamond counterpart. From an operational perspective, the two-phase signals at the crossover intersections can improve capacity, reduce delay, and promote better coordination with adjacent traffic signals on the corridor.

From a safety perspective

How VHB Can Help

VHB developed preliminary and final designs for a DDI at the interchange of I-77 and Gilead Road in Huntersville, NC. The design recommended a second parallel structure rather than widening the existing bridge, which provided better geometry at the crossovers and improved the maintenance of traffic during the construction phase. Gilead Road serves as a gateway to downtown Huntersville, bicyclists and pedestrians were a key consideration of the project. On-street bike lanes were carried through the DDI, and sidewalks and signalized crosswalks were provided to accommodate pedestrians through the interchange area. In addition to leading the project development and design efforts for the Huntersville DDI, the VHB Team was instrumental in coordinating with and informing local officials, the local business community, and the general public through a series of meetings and informational sessions.

VHB not only delivers local projects to our communities but is also active on a national level through our Federal Safety Practice. We routinely engage with industry leaders across the U.S. and internationally on emerging topics in transportation and safety and are constantly monitoring the state of the practice. VHB is actively developing an informational guide for the Federal Highway Administration Office of Safety focused on improving walking and biking at intersections, including innovative designs like the DDI.