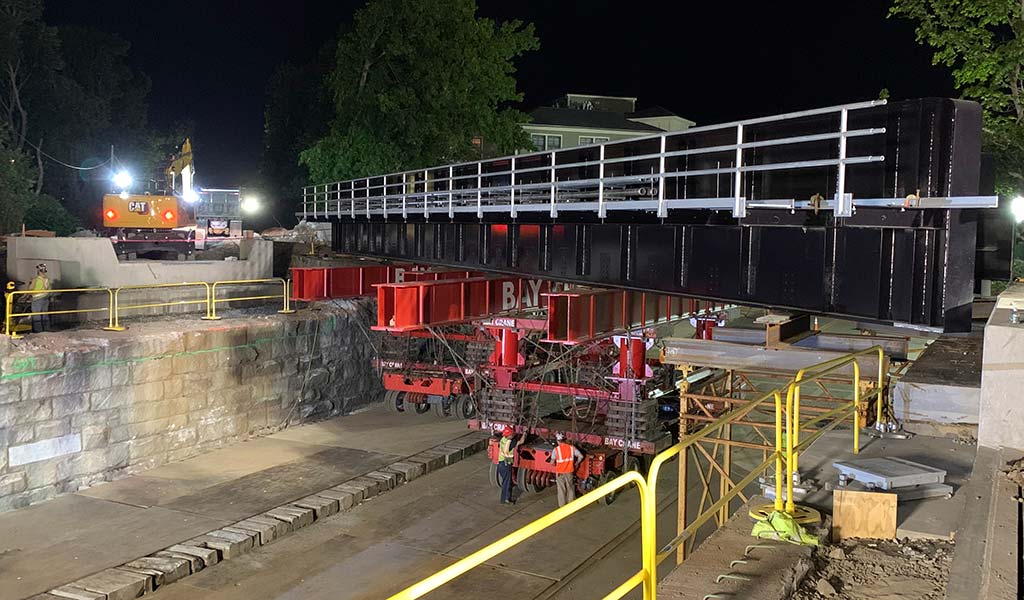 The Robert Street Bridge located in Roslindale, MA, has undergone a comprehensive replacement effort following recent inspection reports confirming the structure was approaching the end of its useful life.  Constructed in 1898 and having undergone a previous rehabilitation in 1985, the bridge has served the public well beyond its intended design life, carrying commuter rail passengers along the Massachusetts Bay Transportation Authority’s (MBTA) Needham Line. To maintain the state of good repair of their infrastructure and provide safe and efficient transportation for transit riders and the public, the MBTA made the timely decision to replace the Robert Street Bridge.

Located in Boston’s busy Roslindale neighborhood, safely replacing the bridge while minimizing impacts to the public was paramount. To facilitate this, the new bridge superstructure was assembled adjacent to the existing bridge and supported above the roadway on temporary supports, allowing both the commuter rail and the roadway below to operate normally.  Over the weekend of June 4, the existing bridge was demolished, and the new bridge was lifted and moved into place using two large-capacity self-propelled modular transporters (SPMTs).

While this Accelerated Bridge Construction (ABC) technique has been used successfully by the MBTA in the past, it was the project’s foundation construction and planning for future rail expansion that made the Robert Street Bridge project unique. With the corner of the Roslindale Village’s rail station platform only two feet away from the rear of one of the bridge’s existing abutments, any impacts to that platform could have triggered a full replacement of the entire station, which was not supported by the project budget.

VHB’s project team developed a foundation layout utilizing micropiles and installing them both through and in front of the existing granite block abutment, topping the pile group with a precast concrete cap. This enabled the new bridge to be supported without impact to either the existing abutment, or the adjacent station platform.

The Needham Line is currently a single track, but decades ago the rail corridor supported a second track. To avoid precluding future rail expansion, the VHB team designed and detailed the new bridge foundations to accommodate a potential twin-track bridge structure. While there is not a rail expansion planned currently, this forward-thinking approach would facilitate any possible upgrades to the bridge within the right-of-way with minimal disruption to the existing track.

“We were met with a fair amount of challenges with the replacement of the Robert Street Bridge,” said VHB’s Highway and Structures Director, Robert Penfield, PE, DBIA, ENV SP, “Our team worked hard to develop a thoughtful future-proof design, while pragmatically applying ABC techniques to provide a truly cost-effective solution to the MBTA while minimizing impacts to the traveling public and the community.”

The Robert Street Bridge construction is nearing completion and is open for use. To learn more about this project or VHB, please contact Robert Penfield at rpenfield@vhb.com.