VHB, as lead consultant, officially kicked off the conceptual design and environmental review phase for the pedestrian, bicycle, and micromobility connection project between Crystal City/National Landing and Ronald Reagan Washington National Airport (DCA) in Arlington County, Virginia. This project, also known as CC2DCA, is intended to meet the growing need for intermodal connectivity between DCA and National Landing, the site of Amazon’s second headquarters, which is anticipated to bring more than 25,000 jobs to the area over the next decade.

When Amazon began evaluating potential locations for their HQ2 location in 2017, National Landing’s proximity to a major airport helped bolster its selection. However, while only half a mile separates National Landing from the airport, the George Washington Memorial Parkway and CSXT rail corridors create a challenge for travelers choosing to access the airport by any way other than car or Metro. The need for the CC2DCA connector stems from the desire to provide business travelers, residents, and visitors with a convenient way to access the airport by foot or bike. Not only will it provide pedestrian access to a national air travel hub, it will also create and enhance connections among the airport, the future VRE new commuter rail station, also under design by VHB, and the multi-use Mount Vernon Trail.

VHB’s involvement with the vision for a CC2DCA intermodal connector began in 2017 through the Crystal City Business Improvement District (BID), now known as National Landing BID. For the BID, VHB conducted a feasibility study to assess the project’s potential, engage stakeholders, and receive input through an involved public process. The current conceptual design and environmental project was administered by Arlington County and will consider multiple alternatives to establish the desired connectivity. VHB was selected as the lead consultant with SOM for architecture, T.Y. Lin International for context-sensitive bridge design, and Schnabel Engineering for tunnel design and geotechnical engineering. The project requires compliance with NEPA and involves the preparation of an environmental impact statement (EIS) to evaluate the environmental impacts of a range of connector alternatives. VDOT will be joint lead agency for the NEPA process, with FHWA as the lead federal agency. Public involvement will be an essential part of this process.

Laurent Cartayrade, Project Manager for VHB, noted, “This project reflects the dedication of the region on improving mobility and connectivity, and making the Metro DC area a thriving place for residents, visitors, and businesses. Over the next three years, we will be diligently working with Arlington County and VDOT on this transformational project. We look forward to delivering a final product responsive to Arlington County’s and the National Landing community’s needs.”

In addition to the CC2DCA project, VHB is working on numerous projects to enhance connectivity and mobility within the region. Most recently, VHB was selected as the engineering consultant for the preliminary engineering phase of the Long Bridge rail project, connecting Arlington to DC – a $21 million project that will transform the eastern seaboard’s freight and passenger rail network. VHB also provided site/civil engineering for the recently opened World War I Memorial and the soon to open Children’s National Hospital at Walter Reed.

Interested in learning more about the CC2DCA project and our work across Metro DC? Contact Mark Colgan at mcolgan@vhb.com. 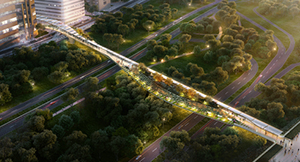