Mike Carragher Named CEO of the Year by EFCG 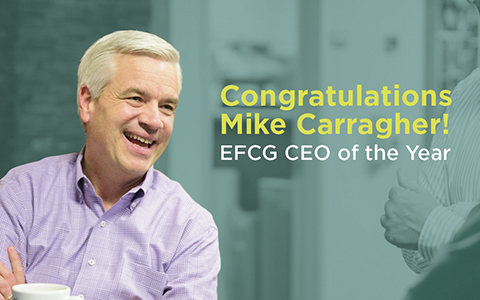 We’re delighted to share that Environmental Financial Consulting Group (EFCG), the leading advisor to AEC firms, has named Mike Carragher the 2021 CEO of the Year. This prestigious honor recognizes Mike’s outstanding industry leadership, work ethic, and integrity, along with the significant impact he has had on VHB’s growth and success since taking the helm in 2015. Mike was presented with the award during the 32nd Annual EFCG CEO Conference in Denver, CO, on September 29.

As VHB’s first non-founder president, Mike has led the company through one of its most transformational, successful, and strategic periods of growth and technological advancement. Under the nearly six years of Mike’s leadership, VHB has grown from $185M in gross revenues to an estimated $309M.

VHB co-founder and past CEO & Chairman of the Board Bob Brustlin said, “Mike has an unwavering passion for VHB and the future growth and success of our Generational Company. He is a true reflection of VHB’s vitality, and his visionary leadership propels the team to continue to be future focused, thinking about the bigger picture and what is possible. He has built a remarkably strong leadership team, and I have the highest level of confidence and admiration in the way they have led with compassion and are energized to succeed—especially in light of the challenges of the pandemic over the past 18+ months. This recognition is very well deserved.”

Recognizing a need for a cultural shift, Mike is helping to ignite the conversation around diversity, equity, and inclusion across the AEC industry. Through his leadership role in the ACEC Design Professionals Council, Mike is a tireless and vocal advocate for advancing diversity in the workplace and creating more inclusive work environments. He is often called upon to speak on the topic for industry organizations, including WTS, ACEC, and EFCG.

“This is a truly humbling recognition and one that only happens when the efforts of many people come together, in alignment, to accomplish great things. I have the privilege of partnering with an incredibly insightful, passionate, committed, resilient team of leaders at VHB,” said Mike. “We are the fortunate stewards of VHB, and as I learned from our founders, when we do this right, the next generation of VHBers will be prepared and empowered to take the firm to even greater heights.”