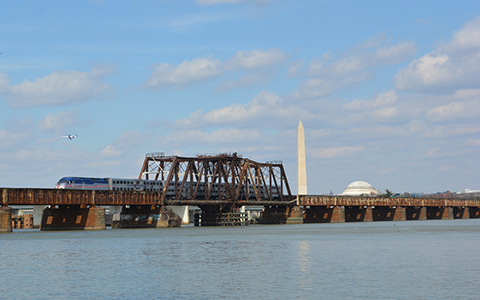 The District Department of Transportation (DDOT) and Virginia Department of Rail and Public Transportation reached a major milestone this month on the Long Bridge Project with publication of the Draft Environmental Impact Statement (DEIS). VHB led the preparation of the DEIS, which is necessary to meet National Environmental Policy Act requirements and keep the project moving forward on schedule.

Working with the Federal Railroad Administration, DDOT evaluated the potential impacts and benefits of improvements to the existing two-track railroad bridge over the Potomac River and associated railroad infrastructure. Owned and operated by CSX Transportation, Long Bridge is also used by Amtrak and Virginia Railway Express (VRE) and represents the only railroad crossing between Washington, D.C., and the Commonwealth of Virginia.

Constructed in 1904, Long Bridge serves freight, intercity passengers, and commuter rail—with train volumes expected to increase by 150 percent by 2040. The DEIS addresses long-term railroad capacity needs, resiliency, and redundancy to accommodate projected demand and identifies the Preferred Alternative, which is to construct a new 2,300-foot-long, two-track bridge upstream of the existing bridge, while retaining the existing bridge to create a four-track crossing. The Preferred Alternative also includes 1.8 miles of track improvements and nine other new bridges and will tie into both the D.C.-to-Richmond Southeast High-Speed Rail (DC2RVA) Project's four-track alignment in Virginia and VRE's proposed four-track expansion project in the District. In addition to the Preferred Alternative, the DEIS also identifies a No Action Alternative.

“This project is important for improving mobility and connectivity along the corridor," said VHB Deputy Project Manager Lee Farmer. “Long Bridge represents a critical link, not only in the Metro D.C. area, but regionally, and as part of our national transportation network."

VHB led the preparation of the DEIS and conceptual design and facilitated coordination with multiple stakeholders, including local, regional, and federal agencies, such as the National Park Service, which administers the parks on either side of the Potomac River that would be affected by the project. A Final EIS and Record of Decision is expected to be issued in 2020.

The full document can be viewed here.