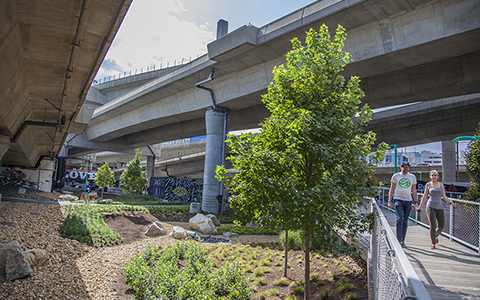 ​​​In the engineering industry’s version of the Academy Awards, ACEC/MA honored its best and brightest on March 14 at the annual ACEC/MA 2018 Engineering Excellence and Awards Gala. These awards are given to engineering achievements that demonstrate the highest degree of merit and ingenuity.

VHB also had a role in several of the other projects submitted by our partner firms. These projects included The Thomas J. Butler Dedicated Freight Corridor & Memorial Park (submitted by HDR), the I-90 All Electronic Tolling System and Conversion (submitted separately by both AECOM and CDM Smith), the Springfield Railcar Assembly Facility (submitted by Gannet Fleming), and the Northeastern University Interdisciplinary Science and Engineering Center (ISEC) (submitted by ARUP).

Congratulations to all winners!