Outdoor activities like bike riding and trail use are booming nationwide and are especially popular in the Sunshine State where weather favors year-round use. Paved multi-use trails have numerous benefits beyond health and wellness. VHB recently partnered with the City of Orlando and Florida Department of Transportation (FDOT) to complete its signature Urban Trail near Downtown—bringing connectivity to communities and spurring economic development in new neighborhoods along a shared bicycle and pedestrian path that glows in the dark. 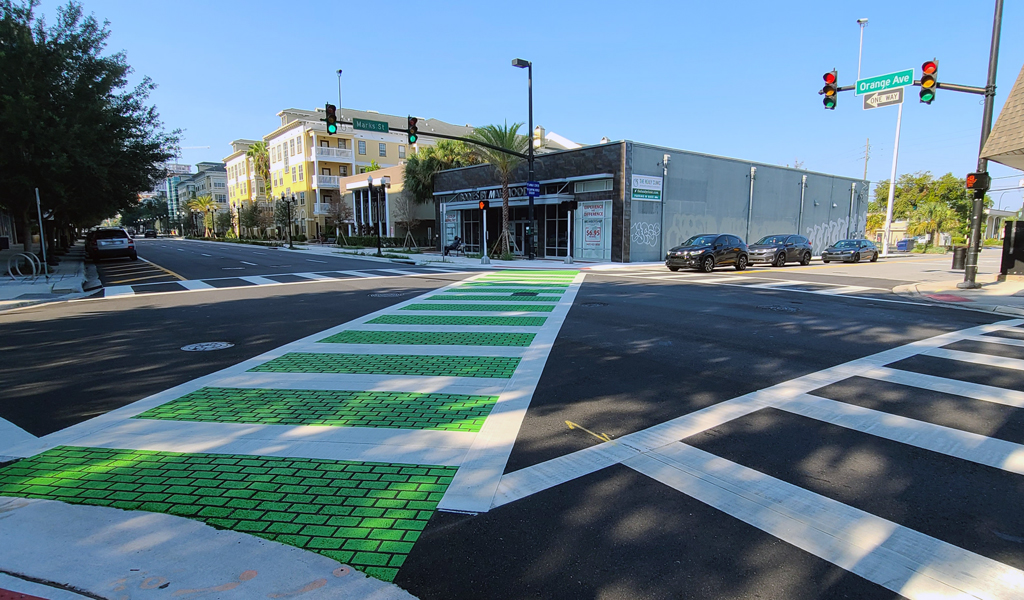 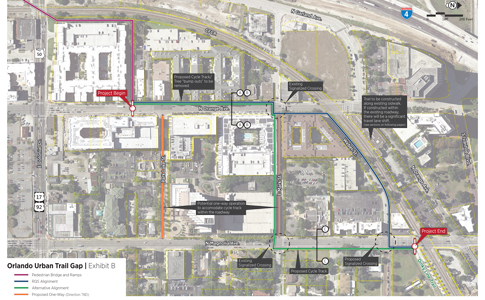 An integrated team of VHB bicycle and pedestrian planners, transportation, and stormwater engineers collaborated to help the City of Orlando design and construct two separate segments to complete the signature 12-foot-wide, paved trail and elevate placemaking, safety, and equity in the process. The trail meanders through the city’s museum and cultural district at Loch Haven Park, Mead Gardens, and around six lakes and historic neighborhoods. Average daily ridership is more than 500 bicyclists and pedestrians.

Our relationships with a diverse group of stakeholders helped move the trail project forward on time and under budget.

The new southern extension along Division Street between Michigan Street and Anderson Street near Downtown traverses a busy Sunrail station and segues through an industrial area that is expanding with new development. Trail visitors will also be able to access a significant memorial and museum planned to commemorate the 2016 Pulse nightclub tragedy nearby.

A second gap segment along Orange Avenue and Weber Street between the new SR 50 pedestrian overpass approach and Magnolia Avenue included the development of a separated bike lane along Orange Avenue and a typical section to accommodate sidewalk and trail users. The gap portion required close coordination with FDOT’s I-4 Ultimate improvement project, a 21+ mile, $2.3 billion improvement project on Central Florida’s most heavily travelled interstate that aims to create a signature corridor to connect communities and enhance livable along the interstate.

Decorative crosswalks, a mix of hardscape treatments on the sidewalks, bright color patterns, a glow in the dark aggregate on alternate panels of the sidewalk in the southern portion of the trail create cohesion. The aggregate collects sun during the day to subtly light the path at night and incorporates light in the corridor in an unexpected way.

“The Urban Trail project is a great example of how VHB’s different disciplines collaborate to bring a project to fruition that benefits the whole community,” said Marc Hustad, PE, Orlando Managing Director.

Contact Ryan for more information about elevating transportation infrastructure in your community.